A Quick Guide To Easy Solutions For Erectile Dysfunction 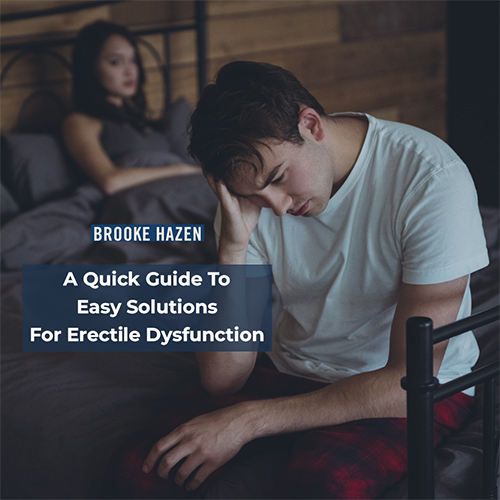 There is no more need to live in fear, desperation and depression. There is absolutely no place for ED today. I have simple and easy holistic solutions for ED.

I may be the only ED expert on the planet to identify and offer holistic and effective curative and preventative solutions for all three different major forms of ED.

The second major form of ED is Energetic ED. This is caused by releasing semen too often, causing the Chi Sexual energy and overall physical energy in our body to become depleted and fatigued. This results in being unable to perform sexually, as well as in life physically and relationally.

Semen release is also a dopamine addiction. In the west, we are unaware of the immense toll that Semen release takes on a man. Eastern traditions have been aware for millennia that each man has limited Chi Sexual energy. We can still have full body orgasms and ejaculation, but we simply are blocking the Semen from being released.

The moment semen is released, dopamine levels crash and prolactin levels increase, as the body goes into an intense refractory period and process of replenishment, pulling all the most precious growth factors, hormones and nutrients to replace the vital sperm. This causes fatigue, mood imbalance and distancing in the relationship. This process is most intense for the first few days, but the science shows that this process weaves up and down for up to two weeks. Overlapping dopamine crashes cause a perpetual state of chronic fatigue, mood imbalance, irritability, anger and a complete inability to connect in the relationship.

Eastern traditions have been aware for millennia of the transformative powers that semen retention holds for our sexual, physical, relational, emotional, and mental health, as well as to create success in all areas of life. Semen retention is the most feared and misunderstood beneficial sexual behaviors in the West. Most men are afraid it will decrease satisfaction.

Paradoxically, Semen retention dramatically increases sexual sensitivity, potency, performance, and embodiment. It dramatically prolongs sexual performance, so that we are now in alignment with the arousal cycles of our female sexual partner. And most importantly, it avoids the dopamine crash which causes distancing and satiety in the relationship.

The easy and simple solution for this second major form of ED is to practice semen retention during love making. When coupled with bonding behaviors which build oxytocin, this results in long-lasting relationships which can last indefinitely. Use the Kegel exercises, which flex the pelvic floor muscles to avoid semen release during love-making, and slow down the process when the energy builds too fast.

The third major form of ED is organic ED. This is the one we are hyper-focused on. Mainstream Western Medicine and the Pharmaceutical Industry want us to live in fear of ED, and believe that the only form of ED is organic, so that we are dependent on their only tool they have for all major forms of ED, which are nitric oxide inducing pharmaceutical drugs. Nitric oxide is what causes increased blood flow throughout our blood vessels.

However, these Pharmaceutical ED drugs, and even natural supplements which boost nitric oxide, never get to the root cause of the nitric oxide dysfunction. Instead, they artificially produce nitric oxide outside of what our body is capable of producing, and only for a few hours, to all the parts of our body, including the brain, heart and muscles. This results in debilitating side effects, and a dependence on pharmaceutical drugs with diminishing and often failing results. These drugs are being misdiagnosed and misprescribed for millions of men who do not have blood flow problems, but instead, have neurological and energetic ED.

We need to be clear that these pharmaceutical, and even natural drugs, do not cure anything. I have a natural solution to eliminate the source of nitric oxide dysfunction, which allows our own body to produce healthy levels of nitric oxide intelligently from within, whenever and wherever we need it, rather than being dependent on an outside source every time we want to make love.

Arteriosclerosis is a conglomeration of heavy metals, plaque, and calcification. Our body produces increasing levels of cholesterol to cover up free radical damage to our endothelial layer, which is responsible for producing healthy levels of nitric oxide.

1) The latest science shows that heavy metals are a major contributor to arteriosclerosis.

2) An animal-based diet is high in free radicals, carcinogens and saturated fats. The science is clear that an animal-based diet causes short-term decreased sexual function, as well as long-term Erectile Dysfunction and arteriosclerosis.

3) Environmental pollutants, such as micro-plastics, heavy metals, chemicals, and pesticides contribute to the formation of arteriosclerosis.

The Trial to Access Chelation Therapy (TACT 1), which is a government comprehensive study, showed that just one full course of EDTA treatments reduced cardiac events by 51% and mortality by 43% in patients with diabetes. This trial was so effective that the TACT 2 study is now ongoing. Numerous studies and experiential evidence, including my own study on myself, show the undeniable effectiveness of chelation and Plaquex IV therapy to safely remove arteriosclerosis naturally, non-invasively, and without side effects.

Eliminate any source of ongoing heavy metal exposure from water, food and air. Change from an animal-based diet to a plant-based diet which is healthy and protects us from the 15 leading causes of death in the world. I recommend organic fruits, vegetables, nuts, seeds and whole grains. I do not recommend soft drinks, sugars, and processed flours (which convert to sugar in the body).

The simple and easy solution for the third major form of ED from organic nitric oxide dysfunction is chelation and Plaquex IV therapy combined with a healthy plant-based diet, exercise, intermittent fasting, donating blood regularly, as well as eliminating heavy metal and environmental pollutant exposure, as well as smoking. I also recommend extra corporal pulse activation technology, which uses ultrasound to break up any plaque in the lingam and surrounding pelvic blood vessels and capillaries. And lastly, there are many more beneficial IV therapies and supplements I recommend which synergistically support this holistic protocol.

The next major source of organic ED is decreased testosterone and increased estrogen.

Arteriosclerosis, low testosterone, and high estrogen are not just in older men today. Older men have had more time to develop unhealthy habits and exposure. However, young men are seeing this also through pesticides in food, micro plastics, and an unhealthy diet.

The simple and easy solution for low testosterone in men, as well as low estrogen in women is Bioidentical Pellet Testosterone Replacement Therapy.

Other forms of organic ED can come from surgeries and injuries. Platelet Rich Plasma combined with Stem Cell Therapy has been shown to be effective at regenerating new blood vessels, capillaries, nerves and cells.

This sums up my effective holistic curative and preventative solutions for all major forms of ED we see today. The solutions are here!There is no more need to live in fear, confusion, disempowerment, and desperation. Reclaim your power, and become the ideal being you are meant to be sexually, physically, relationally, mentally, emotionally, and spiritually. Please refer to my book and tell everyone you know that the solutions are now here! 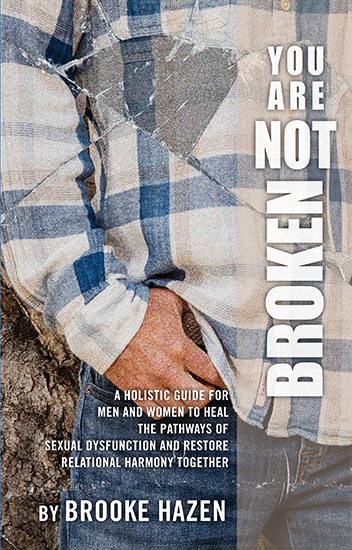